The shoots took place in Mykonos during October 2012. It was the first time the popular US reality show introduced Challenge Games for the cast apart from the usual shoots inside the villa and the nightlife activities.
The games were fun set-ups in different locations on the island.
Produced by Bunim Murray. 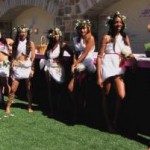